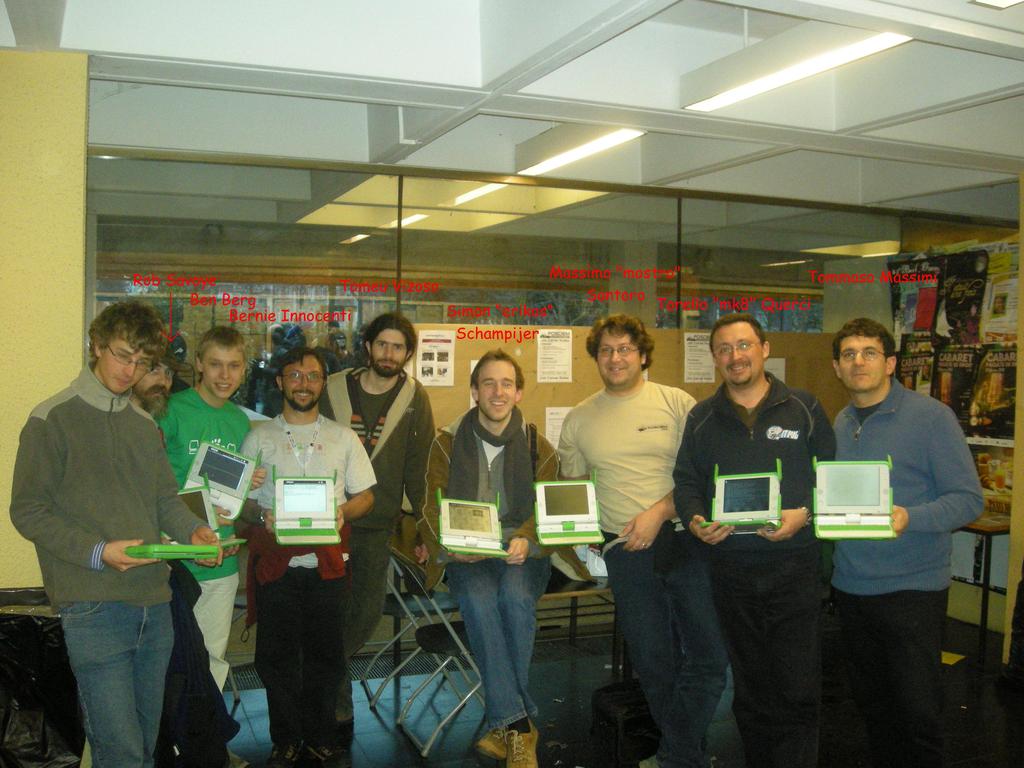 Today I visited the Cairns tropical zoo. They have this cute red panda:

And I could feed kangaroos and wallabies and even cuddle a koala! I have a picture to prove it, but it's not digital.

Arnd has flickr'd a few photos form our visit to the HealsvilleSanctuary:

I like this one with the both of us caressing a Wallaby:

So long, and thanks for all the fish! ¶

Back from diving. I've seen plenty of small fish and medium fish, including the ClownFish (best known as Nemo). I had little luck with the big ones: I've seen only one shark, around 2.5 mt long, but it was really shy and ran away too quickly for me to follow. Yes, sharks do not attack man. If you know otherwise, you must have seen it in a movie. No sea turtles for me, although my travel mates did see many and even touched them.

I've also seen two dolphins, but those don't count because I was on board. And, for some reason, they soon decided that we were uninteresting and swam away.

But now for the amazing thing: during my night dive, *lots* of big fish came around us. I'm ashamed to admit I can't remember their name: they were mostly gray, as big as medium sized dogs, with a bump on their heads, and big lips. They have learned to follow the torch lights at night. They're absolutely not interested in us, only what our beams were pointing at. Every once in a while, I'd spot a small fish in the dark, and the big ones would swim really quickly and smash it! And then spit the little bones! So cool!

We played like this for a while. Poor little fish! But those big ones ought to eat somehow, shouldn't they?

The reef is one of the seven natural wonders of the world for a reason. A zoological garden underwater. Highly recommended to divers and snorkelers.

Crusade on the reef ¶

I'm boarding on a ship to the GreatBarrierReef. I'll be diving all day (and night!) to see the wonderful fish and coral. As a secondary objective, I'll be doing an SSI advanced diving course.

I just arrived in CairnsCity, a small town in the northern part of Queensland. The flight was AU$99 plus taxes (about AU$115): you fly cheap in OZ!

The climate here is clearly sub-tropical: very warm and wet even at 7AM. A rain forest surrounds the city. The sea is 28 degrees Celsius, even at night!

But the weather is crappy :-(

I took a domestic flight from Melbourne to Sydney for just AU$79 plus the usual taxes. It rained all day, but the hostel is huge and has a covered swimming pool at the 8th floor.

Finally, I managed to walk around the city. The parks are as remarkable and well kept as those in London, but with sub-tropical vegetation. The OperaHouse is as impressive as you would expect. The bridge is even more impressive. If you liked BridgeConstructionSet, you'd love this one!

Along with a bunch of other hackers from the LCA, we went to the HealsvilleSanctuary zoological garden. They had all the "usual" animals: kangaroos, wallabies, koalas, wombats, along with the Tasmanian devil and many others.

The kangaroos were not protected by a fence, but they were too scared to come close to us and would just jump away when we got too close.

One wallaby, instead, liked being caressed on the head. They are peaceful animals, very much like grown up rabbits, but with a big tail, clever little forehands and... of course, a pouch :-)