I'm finally back in Asuncíon. Over the last few days, I had the opportunity to interview a dew dozen children who had been using Sugar 0.82 for about one year. Perhaps the most interesting and controversial finding was which activities are the most popular among them: 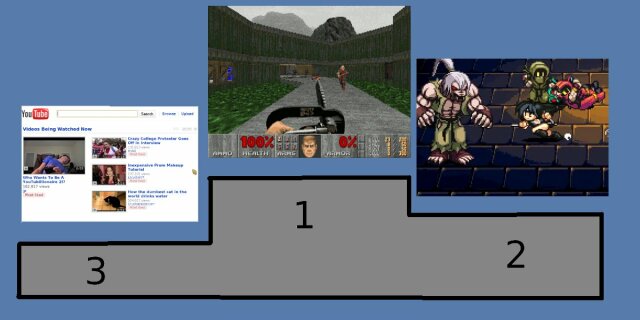 The most popular Sugar activities

Heh, at least Browse made the third place, I thought. But when I asked what websites they were visiting, the answer was invariably "videos".

Well, at the least I could tell they were answering honestly! We often idealize our young users as being creative, passionate and eager to learn just about everything. Some kids are really like this, I met some in Caacupé. However, the naked truth is that the vast majority would rather spend their free time playing.

It's no wonder kids like the game which, according to the Wikipedia, is "widely regarded as one of the most important titles in gaming history". This is no exaggeration: the first 7 hits for the common word "doom" are about the game itself. Then come the film adaptation and various fan sites. Anyway, how can we blame kids for playing games? After all, many of us played Doom and many other types of "inappropriate" video games throughout our childhood.

We quickly took Doom down from the OLPC wiki soon after it was uploaded, yet it is still spreading fast among Sugar users worldwide. Let's look at the positive sides: it shows social behavior and encourages kids to find technical solutions to transfer activities directly (their old version of Sugar does not allow direct sharing from the journal).

So, what to do now? Do we lock the entire system down so that kids could only install applications that we approve? So much for the "child ownership" principle.

Do we develop a couple of boring educational games, in the hope they will keep our kids from playing the "#1 game of all time"? I'm sure that will work :-)

How about admitting defeat and giving them the level editor too? It could redirect some of the existing passion towards learning about advanced concepts of 3D graphics and game deisgn. Don't underestimate the latent creativity of gamers: over 13,000 original maps were created for Doom by young artits of any age and nationality. Later games from ID Software included a programming language which enabled users to create entire new games with relative ease.

Update: Marten Abente, my Paraguay Educa colleague who added 3G broadband support to Sugar, noted that he used his first computer to play Quake when he was 12, and by the age of 16 he was creating many maps for it. Later on, he worked with a friend at the university to create an entire 3D game engine from scratch with SDL and OpenGL. What about the videos? The most popular video websites are Flash based. You Tube would work with Gnash as well, but because the required video codecs are patent encumbered, we're not allowed to ship them in Fedora. Besides, both Flash and Gnash are quite inefficient and would feel sluggish on the XO-1.

So I am left wondering what solutions these kids came up with in order to circumvent the technical limitations and watch their favorite videos.

The coordinator of the education team got curious and asked questions. It seems that some smart kids figured out how to rip videos from You Tube, store them in the journal, and then play them back with some clever hackery. We do not know the details of how this is done, but it is quite impressive.

Even though most kids are inclined to misuse our precious educational technology for gaming and other mundane uses, in order to do what they want, they seem to be acquiring pretty advanced problem-solving abilities in a self-motivated and social way; in other words, the purpose for which OLPC and Sugar were created.

Today I spent some time with three siblings of Caacupé who has impressed me and the educators very much with their original creations in Scratch. Scratch is not a school subject, these kids are learning it on their own driven by their own passion.

Then Jose and I got started. Python is easy, you can explain the basics to a smart kid in less than 30 minutes. I've shown him a few Pippy examples, describing the code briefly before running it, then making small changes to make Jose grasp the possibilities. From his questions and comments, I'm pretty sure that he could figure out the concepts despite my very poor Spanish fluency and my usual disorganized style.

Sofia shows plenty of design talent: she uses Sugar to create short stories featuring her friends. She cookie-cuts their photos and uses Scratch to animate them on fantasy backgrounds with music, sound effects and text. Recently, she started creating line-art versions of the photos using eToys, so her new creations look more like cartoons. At this point, Jose mentioned the Happy Tree Friends, an innocently named Internet series which makes even South Park seem politically correct in comparison! HTF is Flash-only and doesn't seem to work with Gnash — at least, we should be above any bigot criticism for conveying "inapprorpiate content" to young hack^Wchildren.

Sofia also created a platform videogame in which a dog needs to jump around to find the way out from each level, while a bouncing arrow chases him. Technically simple, but shows sensitive use of game-design principles. I'm not sure if the code is entirely new or comes in part from pre-existing Scratch games. It doesn't matter: in Free Software, remixing other people's work is the rule.

We updated Jose's and Sofia's laptops to F11-XO1 Paraguay, build 65, which contains the latest release of Sugar 0.84. Jose had been previously testing my build 45, revealing some bugs in networking and activities.

(Google translation with my manual corrctions)

I witnessed it with my own eyes: every day, children start lining up outside of CATS' door early in the morning, and keep coming all day long, until the evening. All of them ask for the new version, bui in interesting ways: a little boy said:

They're obviously referring to the Gnome desktop, also known as "salva pantallas" (screensaver). Another kid admired his freshly installed Gnome desktop and proudly declared: "Ahora tienen Windows!" (now I have Windows). In Spanish, therre's no ambiguity on the meaning of the word Windows.

Power of brand. It doesn't rmatter if it's the actual Windows, or even if it really does anything useful at all. It's new, it's colored and it's what adults are using. Oh, and it also comes with a screensaver which makes it irresistible.

Of course not, but could we do anything to appeal to kids more than a traditional desktop? I don't claim to be a pedagogist, but by now I've observed our young users closely enough to be able to guess what they're really missing in Sugar:

Yeah, dozen of scientific studies showed how users almost never customize the desktops beyond setting a background image. Kids, however, are a lot more passionate about their precious laptop than the average office clerk using Windows. They do cover the exterior of their laptops with colorful stickers.

Believe it or not, many of these kids also set their Home View with the random icon layout (aka "the Negroponte layout"), because it lets them drag icons around and arrange them in clever ways. I could take many screenshot to prove it, but I particulatily like this one abusing Sugar's user name field to create a drawing on three lines. These kids do not live in the middle of Silicon Valley; it is very likely that they rediscovered the technique of ASCII art completely on their own. The original idea was passed along and successively refined by several anonymous artists.

Finally, what was the gray-scale palette supposed to mean in our UI? I was explained it once, and it seemed to make some sense, but now I forgot. And, whatver the reason was, kids are unlikely to agree with us.

Let's give our users a control panel applet for customizing colors as they wish, or they'll switch to Gnome en masse. I can't blame them, either. What would you have done when you were 8?

See all the photos in my Codew'z photostream.

Note: I'm not really affiliated with MIT and I'm not even an engineer, but it's a flattering mistake ;-)